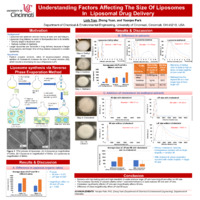 Abstract: Liposomal drug delivery plays an important role in therapeutics. The liposomal drug delivery stabilizes the drug in the liposomes as a capsule for longer circulation in the bloodstream than free drug itself. Especially when the liposomal drug is combined with macroscale structure, such as implants or hydrogel, micron-sized large liposomes are advantageous over nano-sized liposomes because they contain more drug and release drug for a longer time. The purpose of this study is to identify and understand factors affecting the size of the liposomes when synthesized by reverse phase evaporation (RPE) method. Briefly, the RPE method starts with lipids dissolved in organic phase and generates water-in-oil emulsion, i.e., inverse micelles by adding aqueous phase and mechanical agitation, such as sonication and stirring. Then, the organic phase is evaporated to create large liposomes. After the production of liposomes, the size of the inversed micelles and the liposomes were measured by dynamic light scattering (DLS). The hypothesis is that as the size of the inverse micelles increases, the size of liposomes also increases. In addition, the inverse micelles' size is affected by different organic solvents, different ratio of organic phase and aqueous phase, the addition of cholesterol, and the agitation process. To determine the effect of factors, this study tested each condition one at a time. As a result, the use of organic solvents with high boiling point and miscibility with aqueous phase produces large inverse micelles, resulting in increased size of liposomes. The use of different ratio of two phases and the addition of DI water did not show significant effect on the sizes. The addition of cholesterol did not affect the inverse micelle size; however, it decreased the final liposome size significantly. Overall, as the organic phase with higher boiling point was used (diethyl ether -> acetone -> methanol), the liposome size increased. Also, the miscibility of the organic solvent with aqueous phase increases, the size of the inverse micelles increased, resulting in increased size of liposomes. These physicochemical properties of organic solvents may govern the arrangement of the lipids in the emulsion. Understanding the factors affecting the size of the liposomes is useful for further application and research in disease treatment by liposomal drug delivery.