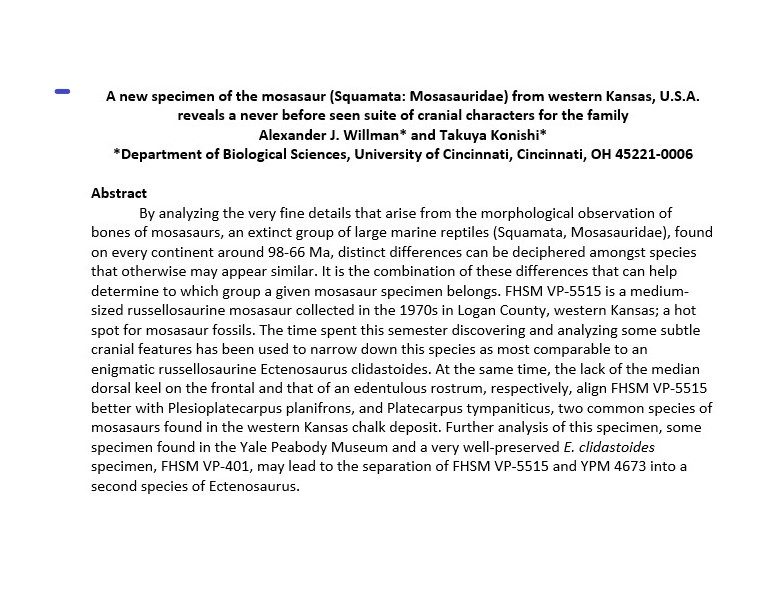 Abstract: By analyzing the very fine details that arise from the morphological observation of bones of mosasaurs, an extinct group of large aquatic reptiles (Squamata, Mosasauridae), distinct differences can be deciphered amongst species. FHSM VP-5515 is a medium-sized russellosaurine mosasaur collected in 1970s in Logan County, western Kansas. A suite of at least six cranial features proved unique to this specimen at the species level, as follows: (1) the total lack of the edentulous rostrum on the premaxilla, resulting in the lack of bony projection beyond the front two teeth of the snout; (2) a nonexistent median dorsal keel on the frontal; (3) straight, long preorbital borders of the frontal converging anteriorly at 30 degrees from each other; (4) the frontal forming a thick supraorbital border; (5) the articulating surface of the splenial exhibiting dorsomedial expansion; and (6) deep dorsal notching present just posterior to the glenoid fossa on the articular. The last character is hitherto unrecognized in any mosasaur mandible. The time spent this semester discovering and analyzing these subtle features has been used to narrow down this specimen as being most comparable to an enigmatic russellosaurine Ectenosaurus clidastoides. At the same time, the lack of the median dorsal keel on the frontal and that of an edentulous rostrum, respectively, align FHSM VP-5515 favorably with Plesioplatecarpus planifrons and Platecarpus tympaniticus, two common species of mosasaurs found in the western Kansas chalk deposit. Further analysis may lead to the separate designation of this specimen to its own species.