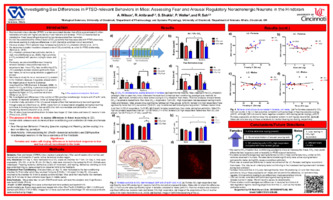 Abstract: Post-traumatic stress disorder (PTSD) is a fear-associated disorder characterized by maladaptive responding to a perceived threat and the persistence of fear memories associated with the original trauma. PTSD afflicts approximately 6 million individuals annually. Despite it having a higher prevalence in women, studies in females are lacking. Previous studies in our lab were limited to male animals, and thus more research is warranted in females. Our lab has been exploring a pre-trauma vulnerability factor that may promote PTSD: sensitivity to CO2 inhalation, an internal homeostatic stressor. We developed a mouse model where mice sensitive to CO2 have displayed a fearful phenotype to a stimulus that they had associated with an adverse event. Previously, we reported differential behavioral responses and discrete neuronal activation in CO2-fear conditioned female versus male mice, specifically active coping behaviors in females suggestive of arousal. However, the identity of neurons promoting these behaviors is unknown. The current study assesses noradrenergic (NE) neurons within the locus coeruleus (LC), which regulates arousal and fear and is known to be sexually dimorphic. We hypothesized increased NE "tone" and LC neuronal recruitment in female mice. DBH (NE-specific marker) and ∆FosB+ (neuronal recruitment marker) immunohistochemistry were used to label cells within the LC in air/CO2/fear conditioned male and female mice. Cell counting and statistical analysis were conducted to assess group differences. Our study provides novel insights on the role of LC noradrenergic system in promoting sex differences in coping and fear relevant to PTSD vulnerability.