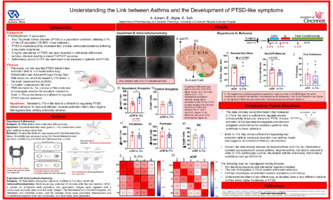 Abstract: A high prevalence of PTSD has been reported in individuals with severe asthma, which is characterized by an increase in Th-17 cells and IL-17a. The premise of this study is to assess the impact of central IL-17a administration in order to understand the effects of inflammation directly in the brain. It was hypothesized that the localized increase of IL-17a in the brain will directly impact PTSD- relevant behavior in mice and will affect neuronal activation in brain areas that play a regulatory role in anxiety behavior. In order to test this hypothesis, mice were given injections of IL-17a directly into their brain in order to investigate the effects of central inflammation. Control and experimental mice were all put through behavior paradigms that test their anxiety, sociability, and fear levels. Additionally, a cFOS stain, an immediate early activation gene, was performed as an indicator of recent neuronal activity. The cells of the Basolateral Amygdala, the Medial-Prefrontal Cortex, and the Dentate Gyrus were quantified as these brain regions have been seen to be associated with an increased fear and anxiety response. The outcome of this experiment provides novel information which demonstrates that a central increase of IL-17a in the brain can impact anxiety and sociability behavior. Furthermore, the data suggests that IL-17a may play a significant role in the Amygdala. Overall, this study on IL-17a regulation of behavior and regional neuronal activation are relevant to the lab's interest in understanding the PTSD-asthma link.