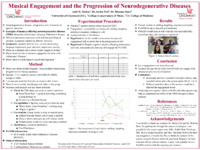 Abstract: Neurodegenerative diseases (NDD) occur due to a progressive loss of neurons in parts of the nervous system. Some examples of common NDDs affecting memory are dementias (Alzheimer's disease), Parkinson's disease, and strokes. Each disease has different effects on the patients and based on the networks that are affected, there are different symptoms and effects that are observed. Some symptoms are episodic memory loss, sensory processing, language impairment, poor attention, depression, and anxiety. People with an NDD (PwNDD) typically do not have any cure for their disease, therefore, they need to take medications or participate in therapeutic activities to alleviate the magnitude of the symptoms. In this study, we look at the effects of a music program on participation and engagement in a PwNDD. The music program, Music and Brain Health, utilized structured and unstructured music and arts-based activities. Engagement was measured by the occurrence of the PwNDD smiling, laughing, (non-verbal) reacting/making comments, and looking at his wife. Preliminary results show that less engagement was observed over time and that abilities decline due to NDD, but PwNDD can engage with structured activities. The findings of this study can help us understand the effect of the NDD throughout the progression of this program.