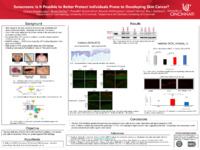 Abstract: Skin cancer, which includes melanoma and non-melanoma, is the most common of all types of cancers. Skin cancer most often develops on areas exposed to sun, primarily due to the damaging effects of ultraviolet radiation (UVR) on cells. Cyclobutane pyrimidine dimers (CPDs) are highly mutagenic and the most abundant type of DNA damage found in UVR exposed skin. CPDs originate from the crosslink of two adjacent pyrimidines and can be formed by the direct DNA absorption of UV energy. CPDs can also be generated by the chemo-sensitization of pheomelanin, the type of pigment prevalent in light skin complexion, in a process dependent on high levels of reactive oxygen species (ROS). NOX enzymes are composed of a complex of proteins that are assembled and activated by UVR. In particular, the activation of NOX-1 causes acute elevation of ROS and a subsequent later surge in CPDs. This study evaluated novel inhibitors of NOX-1 on their effects on ROS and CPD formation in skin cells irradiated with UV derived from a solar simulator source. The efficacy of the inhibitor was tested using melanocyte and keratinocyte primary cells, as well as in human skin explant model. Viability of cells and CPD formation assessment were compared in treated and untreated experimental groups. The results demonstrated that NOX-1 inhibitors significantly reduced ROS and increased cell viability by mitigating UV-induced CPD formation. This study suggests that incorporation of NOX-1 inhibitors into sunscreens could represent a new generation of products with enhanced capacity to provide skin photo-protection.