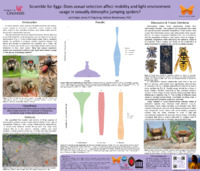 Abstract: In many species, when sexually receptive females are scarce, males engage in scramble competition; males compete with each other to find receptive females, and faster males tend to have better reproductive success. This phenomenon has been observed across diverse taxa yet is not well studied in jumping spiders such as those in the genus Habronattus. Once a Habronattus male finds a receptive female, he performs a complex, colorful courtship display that allows the female to determine his suitability as a mate, the colors of which are only visible to females in high-light environments. How has sexual selection acted upon movement patterns and light environment usage in this group of jumping spiders? We hypothesize that male Habronattus jumping spiders are under sexual selection for increased movement and usage of high light environments. We quantified the location and activity of three species of Habronattus spiders (n=54) in their natural habitat at the Edge of Appalachia Preserve, Ohio, during fifteen-minute focal observations. To record total distance moved during each trial, flags were planted at the spider's starting, ending, and pivot positions. Spider position under sun or shade was also recorded. Habronattus males travel significantly farther than females, which supports our hypothesis that males are operating under scramble competition. H. calcaratusm spends significantly more time in the sun than H. decorus, and neither differed significantly from H. coecatus. This could be due to niche partitioning, variation in color usage during courtship between species, or variation in visual distinctiveness between males of sympatric species.