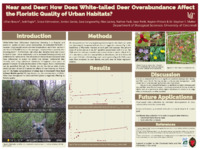 Abstract: White-Tailed Deer (Odocoileus virginianus) abundant in the Cincinnati area and the Cincinnati Parks System. High urban deer densities have been shown to lead to lower native biodiversity due to their increased browsing activity, and preference for native plants. To evaluate the extent of this impact, floristic biodiversity can be quantified in the form of an index, the Floristic Quality Abundance Index (FQAI). Do higher concentrations of urban deer in Cincinnati's Parks lead to lower floristic quality? We hypothesize that the overabundance of White-Tailed Deer is negatively affecting the floristic quality in the Cincinnati Parks System. The University of Cincinnati and Cincinnati Parks have collaborated to assess the relationship between white-tailed deer and occurring spring ephemeral intensity throughout urban parks of greater Cincinnati. Camera traps have been placed at nine Cincinnati Parks employing deer management techniques. Deer population metrics were extrapolated from the frequency with which they trigger the cameras. We established 50-meter transects in each park to perform plant surveys. We also looked at the correlation between park size and FQAI score. Our studies showed that there is no significant correlation between deer density and FQAI score. This may be due to effective deer management, small sample size or exhaustive grazing from local deer populations. Our studies also showed that there is no significant correlation between park size and FQAI score, however a trend was observed which may be due to effects like the species-area effect, higher disturbance in smaller parks, edge effect in smaller parks, or urban proximity.