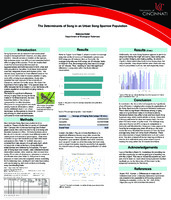 Abstract: Song Sparrows are an abundant and widespread songbird throughout North America, including urban habitats. Despite numerous studies on the species, little is known about how different environmental factors affect singing in this species. We studied Song Sparrows in four different areas in the city of Cincinnati in order to assess whether singing rates differ among local populations. Study sites included the main campus of the University of Cincinnati, Burnet Woods and two Corryville areas. We tested the hypothesis that singing rate in this species does not differ between territorial males in urban territories with sparse vegetation compared to singing males in greenspace. Data were also collected on singing rate across different weather and time of day, singing height, and countersinging from neighboring territorial males. We found no significant difference among singing rates among territorial males in the four locations, but also found few birds on the campus compared to the other locations. Response to song playback was weak among males in all locations, which merits additional study in an urban landscape, as the species is known to adjust song in urban environments compared to more rural landscapes.