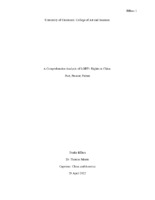 Abstract: Same-sex marriage is an issue that has been introduced on a world stage only in more recent years. The United States along with other "Western" nations have been seemingly deemed as leaders in the fight for LGBT rights, even though the US only legalized gay marriage in 2015, but understanding the way legislation moves and what protections exist in other nations is equally as important. In this paper I analyze the topic of same-sex marriage in China, beginning with an analysis of Chinese culture surrounding marriage and moving into the many topics that affect LGBT individuals, the LGBT community, and legislation or lack thereof for same-sex couples. Different research has taken place with the interest of LGBT rights in China looking into the way LGBT rights have changed based on healthcare, including the AIDS epidemic, censorship and media, as well as individual experience in youth and those who have gone through conversion therapy. The paper will further analyze the future of LGBT rights, not only in China, but other similar nations and the future of same-sex marriage throughout the world.