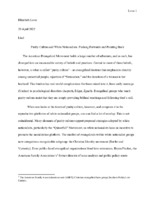 Abstract: The American Evangelical Movement holds a large number of adherents, and as such, has diverged into a innumerable variety of beliefs and practices. Central to all of these beliefs, however, is what is called "purity culture" - an evangelical dogma that emphasizes chastity among unmarried people, rejection of "fornication," and the devotion of a woman to her husband. This burden has real-world implications for women bearing it; according to Uecker, Mormons and conservative protestants are much more likely to marry early than the general population. Cassidy and Turner, writing for UNICEF, report that 86% of children married in the United States between 2000 and 2018 were girls. When one looks at the tenants of purity culture, however, and then compares it to the reproductive platforms of white nationalist groups, one can find a lot of overlap. This is not an accident. Many elements of purity culture support proposed strategies adopted by white nationalists, particularly the "Quiverfull" Movement, so white nationalists have an incentive to promote the moralization platform. Evangelicals often promote the white nationalist platform on immigration for its resistance to the immigration of Muslims to the United States, though they can often go farther. This paper intends to explore the ties between these supposedly separate movements and show that they are not as different as they would like the outside viewer to believe.