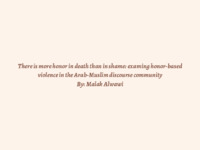 Abstract: Honor violence is a particular form of domestic violence in which the perpetrator(s) emotionally, psychologically, and/or physically assault or kill the victim to protect/uphold family reputation and honor that they believe the victim has threatened by committing an action(s) that violates cultural norms. The threat to honor can be real or perceived. Honor violence is a severely unresearched subject. From existing research, we know that women are the majority victims. There is limited documentation on male victims. This piece focuses on honor violence within the Arab-Muslim community. Information was gathered in an ethnographic fashion from interviews, field notes, and analyses of personal experiences with the community. This study provides a review of the concept of honor, an explanation of honor violence and how it occurs, the relationship between culture and religion and how both are used to facilitate honor crimes, the phenomenon of generational trauma and its connection to honor violence, and analyses of previously documented honor crimes and research. This study has come to find that honor is a vital concept in culture and controls important decisions made by community members. The effects of honor violence on a victim are tremendous and can lead to generational trauma. There is an undeniable connection between culture and religion and the ways in which both are used to justify honor crimes are interesting. Finally, honor violence is a human rights violation that is only increasing in occurrence, and a lack of research and awareness will aid in the femicide of these women.