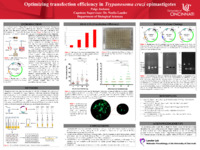 Abstract: Chagas disease, the most prevalent parasitic illness in the Americas, affects millions of people upon transmission of Trypanosoma cruzi parasites by kissing bugs. There is currently no vaccine, and minimal treatment is available for the disease, which presents an acute and chronic phase. The acute phase lasts about two months after infection and is when the disease can be effectively treated. However, many individuals do not experience symptoms in the acute phase and therefore do not know they are infected. Chronic phase is life-threating, with 1 out of 3 patients experiencing cardiac and/or gastrointestinal disorders years down the road. To develop alternative treatments, understanding the biology of this parasite is crucial. Genetic modification of T. cruzi is commonly done through transfection, which is the process of artificially delivering in vitro engineered DNA into eukaryotic cells. This project analyzes transfection efficiency using varying amounts of DNA to generate transgenic parasites with green, fluorescent nuclei. Amounts of 5, 10, 20, and 25 µg were used. Optimizing the transfection protocol minimizes the waste of lab reagents and DNA toxicity in the cells. Limiting these issues will allow for greater success in future experiments as well as a more efficient use of lab resources. Success of transfection was determined through culture density and the percentage of fluorescent cells in the culture. Upon analyzing the results using all four DNA amounts, 25 µg per transfection was found to be significantly better than the other concentrations used. We are now using this improved protocol in our laboratory for routine T. cruzi transfections.