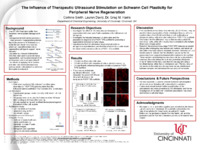 Abstract: Millions of patients in the U.S. suffer from peripheral nervous system (PNS) damage due to injuries and neurodegenerative diseases. The PNS possesses some regenerative potential due to the presence of Schwann cells, which can transdifferentiate into a regenerative cell type to support nerve recovery. Because Schwan cells have been shown to play a critical role in nerve regeneration, finding efficient methods to modulate Schwann cell behavior is an important strategy for developing PNS injury therapies. Application of low intensity ultrasound (US) to cells has gained focus as a non-invasive method for controlling cell behavior. However, the exact impact of US on Schwann cells is not well defined. Additionally, the effects of applying US in tandem with other cues such as electric stimulation has not been investigated. In this study, we analyzed the effect of US on Schwann cells on a piezoelectric PVDF-TrFE scaffold to determine the effect of US on Schwann cell regenerative behavior, and how this effect is mediated by the introduction of a piezoelectric substrate capable of electric stimulation to cells. Our preliminary results indicate that US did not significantly affect proliferation and elongation when cells were cultured on glass coverslips, but US significantly increased elongation for cells cultured on PVDF-TrFE. Thus, US may have a positive effect on Schwann cell regenerative behavior, and this effect may be enhanced when used in combination with a piezoelectric scaffold. The development of therapeutic US treatments can ultimately lead to the production of more effective PNS injury therapies.